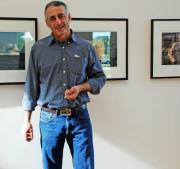 Nicholas Whitman, the photographer featured in our current exhibit Sea, Shore, Sky & Ice: Nicholas Whitman and Susan Schultz is a thoughtful and charismatic character. His work has got lots of visitors asking questions, and we had a few of our own. Here is a look at Nicholas Whitman’s perspective on creating the body of work in our show, and his foundations as a photographer.

DSG: Where did you receive your photography education?

I earned a degree from the Rochester Institute of Technology – class of 1977.
I took classes at what is now UMass Dartmouth before RIT.
But I’d like to think I learn every day.  I learned a lot as a commercial photographer, and  as Curator of Photography at the New Bedford Whaling Museum, and from my photo buddies, with whom I talk shop with frequently. 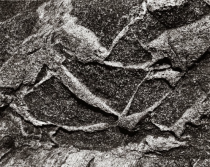 DSG: Your photographs of rock formations have lots of our viewers talking about abstract painting, cave painting, and hieroglyphics. How do other art forms, such as these, factor into your photography process?

Good to hear!  I know what I put in – one never knows what the viewer will take away.  I am aware of and an appreciator of the forms listed above.  It isn’t exactly that they are an influence – all these forms speak to universal concepts.  And this is what I’m interested in too.  I’d like my work to touch nerves we all share.  I’d like my work to be relevant across cultures and across time.  I’m really interested in global, cross cultural symbols that all people share past, present and future.
DSG: which artists have influenced your work?

Many – I’m looking all the time. First of all, my wife Mary Natalizia is a fine painter and my go-to sounding board.
A few photographers at the top of the list are, Aaron Siskind; especially a series he did in Rome, Wynn Bullock; one of several mid 20th century west coast photographer — especially his time exposure seascapes, Minor White; kicked open the door for photographers working with metaphor — also he showed how to harness the power of sequencing.
And some painters, Blakelock & Ryder for their blend of metaphor, symbolism and land/seascape. Bradford, Church and the Hudson River School for their refinement of the sublime in nature. Rothko – for color study, breaking out one component of the medium and working it

DSG: “Time” is an important factor in your work, can you describe the relationship between time and your photography?
Most immediately, a photograph is created in a finite, measurable period or exposure time. Its effect will greatly influence the appearance of the photograph. Weather a moving subject will appear sharp or blurred are examples of this. Exposure time is a corner stone of every photograph. The passage of time after a picture is made is another factor that affects the meaning. Photographs are often referred to as a moment frozen in time. As time passes and the distance grows between the frozen moment of the past and the present, circumstances change, and with them meaning. This is why family pictures are so treasured.
DSG: How do you find your photographs? In other words, can you describe what shooting is like for you?
I don’t walk around with a camera plinking away at stuff.  You make your luck.  I put the right gear in my hands in the right place at the right time.  After that it is out of my hands.
I’ll tell you about one specific instance- On a clear September Vermont morning I found myself bobbing up and down in a banged-up aluminum rental boat at the base of the majestic cliff known as the Palisades on Lake Champlain. Sunlight raked across the limestone, sculpted by glacier, wind and water.  I was packing a medium format camera, a Rollie SL66, which makes a good-sized square negative.
Where the cliff met the water, vignettes just seemed to jump out at me. View after view,  I was in the zone.  All of the images were similar and yet distinct.  The whole roll went through, all 12 frames.  And the spell was broken. We motored along the shore and them back across the lake. Back in the lab the prints did not disappoint.  They were all I’d imagined.

A year or two passed and we found ourselves on the lake once again.  But this time knowing what was possible there I’d brought a much friendlier working platform, my Caledonia Yawl with its extra-wide benches and cubbies for holding gear.  The water was calm — everything was perfect.  I was ready for the pictures to flow, but they didn’t. It didn’t matter how I positioned the boat, compositions were awkward and meaningless.

DSG: So, planning can be futile…

Great photographs are made in the gut — not in the head.  They are felt before they are known.  But there is a great deal of headwork to be done after the shutter is tripped.  The photographer changes hats and becomes a curator.  The work must be selected, organized and interpreted.  It is at this point the photograph must be understood so that materials can be brought to bear and a concept can become a physical reality.  Execute or execute. Finish the piece or cut it from the roster.

DSG: The composition of the iceberg images is very dynamic, and the mode shifts from image to image, some ominous and looming, while others feel joyful and buoyant. Can you talk a bit about what you are capturing in the iceberg photos?

We motored by the icebergs over the course of a few days.  No two were alike.  I guess you find what you are looking for.  They do have personalities — or more accurately we impose our impression on a random collection of variables.  That is human nature — the phenomena which is at the heart of much of my work.  We look for patterns.  We look for answers.  We all do it – mostly the same.
These objects are an amplified example of natural processes.  They change before your very eyes.  They are dynamic.  Imagine a mountain eroding in a year — that’s the time frame and scale you have in an iceberg.